Butterflies in the Stomach 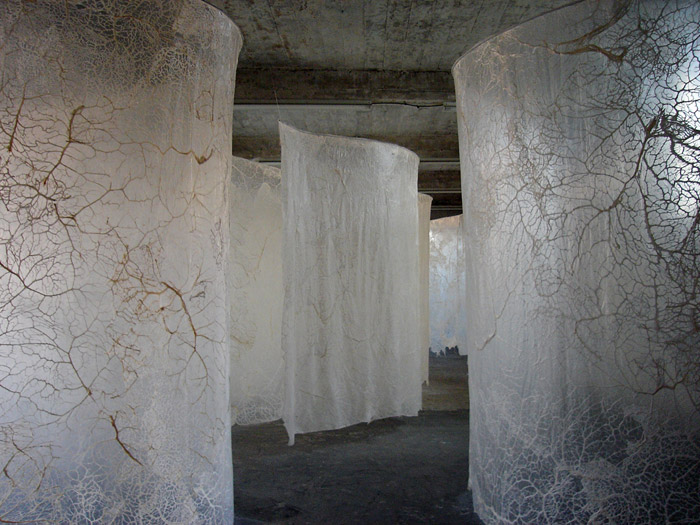 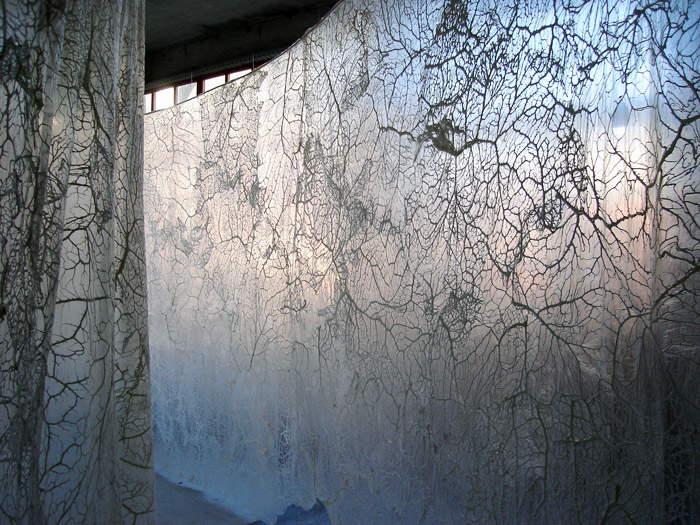 Butterflies in the Stomach was developed during a 3 month residency at L’H du Siege, contemporary gallery in Northern France. The installation took visitors on a journey through an intricate and beautiful 250 square metre labyrinth of caul fat. Suspended sheets of this stretched and fragile material drew people inside; undulating and touching their bodies as they moved through the space, and emanating a fresh (sausage-like) odour.

Elpida’s ongoing interest in the special or unique features of a place, led her to explore the region’s traditional lace making practices. Spending time with the ladies of the ‘Dentelle de Valenciennes’, she borrowed, re-worked and repeated their designs through drawings. A fascination with local food specialties – especially the butcher’s window – introduced the surprising cohabitant: offal.

The intricate and slow production of lace making resonates with Elpida’s own practice, where laborious and skillful work is central to every sculpture. The use of unexpected often unpleasant materials - such as offal - is also a common thread. It is a device that encourages a sense of experimentation, a challenge to the orthodox and, strangely, a celebration of craft.

Butterflies in the Stomach intended to make the hidden visible and encourage a sensitive appreciation of place. It acknowledged the attributes of skill and craft, which are less appreciated in the fast food, mass-produced, consumer-focused society of the 21st Century.

The residency at L’H du Siege, Valenciennes, France took place 2007-8 and was accompanied by a publication with an essay by Mark Segal, Director of ArtSway.